A bridge that was supposed to offer pedestrians safe passage over a busy road has collapsed, killing at least six people and injuring many more. Crushed cars and trapped motorists died or sat terrified and in pain under the rubble while rescuers worked frantically to find survivors. The pedestrian bridge had just been put in place on March 10, 2018, only five days before it collapsed. Construction on the bridge, which was placed to connect Florida International University to the town of Sweetwater, allowing pedestrians to walk over Southwest Eighth Street (also known as Tamiami Trail), was expected to continue into 2019.

The bridge collapse is a stark reminder of the devastation that can occur when a massive structure like a bridge fails. 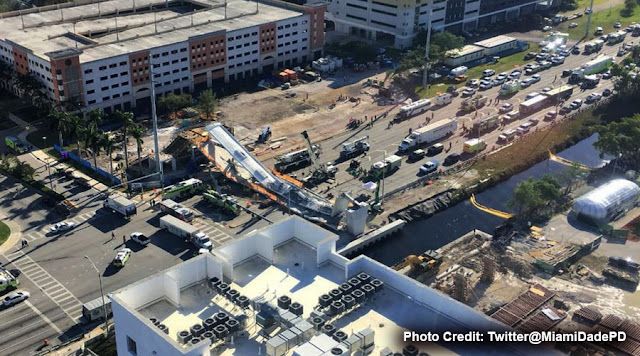 FIU Bridge Failed with No Warning During Construction

The new 950-ton, 174-foot pedestrian bridge collapsed on Thursday, March 15, 2018, just before 2:00 p.m. local time while construction on it continued. The bridge had no stairs or ramps and was not open. But a massive span of the bridge over the highway had been put into place only five days before it collapsed.

A motorist who saw the walkway collapse said it did so with no warning. She believed that several people died when the structure fell on their vehicles. While survivors awaited, first responders and nearby drivers rushed to help those they could get out of their vehicles and away from danger. Doctors and medical students who were nearby also rushed to assist by providing medical attention.


"I was three seconds away from being under the bridge, but I looked forward. All of a sudden I saw the bridge collapse, and it started from the left side of the bridge and it really shocked me," said Susie Bermudez. "There's probably like seven or eight cars under the bridge so it was very shocking to me, and I'm very grateful to be alive."

Jose Mejia, who lives near the crash, told NBC News that he ran to the scene to see if he could help. He saw one man in a red Honda, but was unable to help him. The man reportedly died at the scene.

"Someone on the side of the road had asked a police officer if she had heard any response from the people inside the car," said Isabella Carrasco, who had just driven under the bridge, "and she shook her head and said no."

Rescuers also had to contend with concerns about the structural integrity of the wreckage and sections of the bridge that were not on the ground. Meanwhile, police asked television helicopters to leave the area so responders could listen for the sounds of people calling for help. At least 10 people were taken to Kendall Regional Medical Center, one of those victims died in the hospital.

The area the bridge was being built has been the cause of concern for residents, including students, who say crossing the road there is dangerous. That section of Southwest Eighth Street has a seven-lane highway that pedestrians must cross. In August 2017, 18-year-old Alexis Dale was hit by a car and died while attempting to cross the road.

The university added shuttles to transport students between the campus and Sweetwater, but the shuttles do not run on weekends—when Alexis was killed—and many students do not use them.

The bridge area was also set to receive new sidewalks, a plaza, seating area and Wi-Fi.

When crews put the first section in place, officials spoke about the innovative method of erecting the bridge, which was said to cause minimal traffic disruption and reduce the risk to construction workers. That portion of the bridge was put together by the side of the road as support towers on either end of the bridge were built. Then in a short period, a portion of the pedestrian span was lowered into place via Self-Propelled Modular Transportation. At the time it was put together, university officials said it was the largest bridge put built by those means.

"The project is an outstanding example of the ABC [Accelerated Bridge Construction] method," said Atorod Azizinamini, chairman of FIU’s Civil and Environmental Engineering Department, in a news release. "Building the major element of the bridge—its main span superstructure—outside of the traveled way and away from busy Eighth Street is a milestone."

Shortly after the bridge collapsed, Florida International University released a statement on the tragedy.

"We are shocked and saddened about the tragic events unfolding at the FIU-Sweetwater Bridge," said FIU spokesperson Maydel Santana-Bravo. "At this time, we are still involved in rescue efforts and gathering information. We are working closely with authorities and first responders on the scene. We will share updates as we have them."

FIGG Bridge Design and Munilla Construction Management Construction collaborated on the bridge. FIGG also issued a statement regarding the collapse, noting that in its 40-year history it has never had a collapse like the Florida pedestrian bridge collapse.

"Our entire team mourns the loss of life and injuries associated with this devastating tragedy, and our prayers go out to all involved."

The National Transportation Safety Board is investigating the bridge failure. Both FIGG and MCM said they would cooperate fully with investigators.

A recent report from the American Road & Transportation Builders Association suggested that as many as 54,259 bridges in the United States are structurally deficient. While this doesn't mean they are dangerous, it does raise questions about the safety of infrastructure in the United States. However, an important lesson to be learned from this tragedy is that we cannot wait until collapse is imminent. If the public is to be protected, repairs and replacements must be implemented at the first signs of structural damage.