Six people died in a small plane crash in Texas on Apr. 22, 2019. The Beechcraft BE58 they were traveling in crashed shortly before it was scheduled to land at Kerrville Municipal airport, though witnesses say the plane was off the flight path to the airport. Officials are investigating what caused the plane to crash so close to the airport.

The fatal accident is a stark reminder of the devastation small plane crashes can cause.

At around 7:30 am, the plane left West Houston Airport bound for Kerrville Municipal Airport. It crashed only six miles northwest of its destination. Robert Hurt, a local resident and former pilot, said he was confused as to why the plane was flying so far to the west, off the correct flight path for final approach, especially given the good weather conditions. 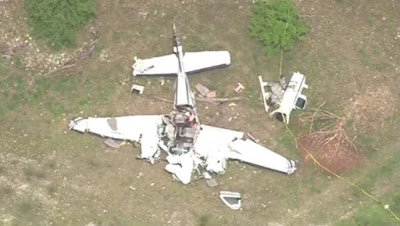 Those who died in the small plane crash were:

All victims were from Houston and all died on impact, according to authorities.

Friends and family members said the six victims were on their way to Kerrville for business, with some suggesting part of the trip involved chartering the plane to survey a property in the area.

Pilot Jeffrey Weiss was remembered as a humanitarian and philanthropist, who frequently spent his personal time transporting people and animals in need of help. He co-owned the plane and often used it to volunteer for Angel Flight South Central—transporting sick people—and Pilot & Paws, transporting animals that needed shelter or adoption. In addition to those efforts, he also volunteered with Young Eagles Flight Squadron, which offers free first flights to youths.

Witnesses to the Texas small plane crash said the plane spiraled in the air and made a sputtering noise before crashing into the rocky ground. In a news conference shortly after the accident, officials said the last time air traffic control spotted the plane it was only 200 meters above the ground but was still six miles from the airport. Furthermore, they noted the aircraft had high vertical speed but low horizontal speed, which did not indicate the pilot was attempting to land.

"[The plane] was making a sput-sput sputtering sound, like the engines were cutting out," Treva Hardeman, who was at home near the crash site, told reporters. "It was just a few seconds later that I heard the boom."

Rodney Simmons, who worked nearby at a construction site and saw the plane descend, said the plane's tail end was low, as though something was dragging behind it or it had too much weight in the back. Simmons said the plane banked hard, flipped over, and dove to the ground.

The plane flew low enough over nearby houses that Bruce Font told a reporter from News4SanAntonio he could read the plane's numbers and see the passengers’ faces from his window. Font heard the engine rev up and down, and then the plane crashed with what he described as a clap sound. He ran to help and said there were no broken trees, nor was there smoke or fire at the scene, but there was red around the plane.

Richard Hall was on a Bobcat vehicle when the plane flew overhead. Hall said he could not hear the aircraft because his Bobcat made so much noise, but people near him said they heard the plane's engine cut out right before it crashed. A different witness said the Beechcraft made a whining sound as it descended.

"I saw [the plane] go sideways, a gust of wind, I don't know," said Roger Perkins. "And then it just nosedived straight behind the houses and the trees. So I couldn't see how it hit or anything like that, but it was loud."

Although witnesses saw the plane descend, no one has come forward to say they saw it hit the ground.

Investigators from the Federal Aviation Administration (FAA) and the National Transportation Safety Board (NTSB) are looking into what caused the Beechcraft to crash. Officials said they would look into the Beechcraft's fuel systems, engines, and propellers, as well as the pilot's health.

Michael Folkerts, an NTSB investigator, said the plane crashed into the ground in an upright position, killing everyone on board instantly.