A doors-off helicopter tour in New York City that killed five people has pushed the Federal Aviation Administration (FAA) to take action banning similar open air tour flights, which many critics have long thought to have extreme risks. The decision came after the National Transportation Safety Board (NTSB), who is in the early stages of their investigation, strongly urged the FAA to take "definitive action."

A lawsuit has already been filed against Liberty Helicopters, who was operating the flight, and FlyNYON, who hired Liberty. The lawsuit accuses both of negligence in the safety of the flight. 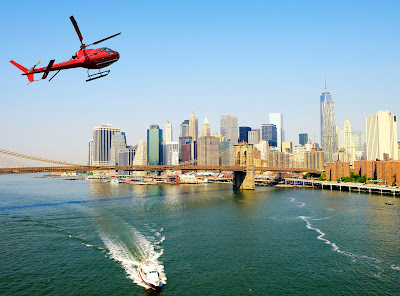 The FAA posted the Notification of Emergency Order of Prohibition on March 22, 2018, almost two weeks after a March 11, 2018, helicopter crash in Manhattan's East River that resulted in five fatalities. It went into effect immediately.

It then describes the conditions of the crash and the role that the harnesses may have played.


Based on the New York helicopter crash, the FAA says the Acting Administration "has determined that an emergency exists related to safety in air commerce" and that there is a "threat to passenger safety presented by the use of supplemental passenger restraint systems not approved by the FAA."

The harnesses in the Liberty Helicopters aircraft that crashed were not those installed by Airbus, according to the NTSB, who said in a news release that they were instead made of off-the-shelf components that FlyNYON, the tour company, had provided.

Thirty-three-year-old Richard Vance piloted the Airbus helicopter and was the only one to survive the crash. He was not wearing the same harness as the passengers on board but was strapped in by manufacturer-installed lap and shoulder belts. The NTSB says that the five passengers on the aircraft drowned after being trapped inside.

Complicated passenger harness systems have been an NTSB concern for years, with a 2008 helicopter crash highlighting the serious need for change. Passengers who survived that crash despite having used such harnesses, described to the safety agency that despite the briefing they received on how to evacuate from the helicopter, they were uncertain how to do so during the emergency.

On March 19, 2018, the NTSB called on the FAA to immediately ban commercial flights that use passenger harness systems that could be difficult for passengers to free themselves from.

Pilot Believes Something May Have Caught Fuel Shutoff Button

The harnesses that trapped each of the five passengers onboard the helicopter and preventing them from escaping the chilly waters of the East River are thought to have been a key factor in causing their deaths, but the helicopter's crash may have been caused by a simple and tragic mishap on the aircraft.

Vance told investigators during interviews that he thought a bag or strap from a harness might have hit the emergency fuel shutoff lever. In a radio transmission captured right before the crash, Vance can be heard saying "Mayday, mayday, mayday" as well as "East River engine failure."

The NTSB has not commented on what role the emergency fuel shutoff lever may have played.

The ages of the victims of the fatal New York helicopter crash ranged from 26 to 34. Some lived in New York and some had traveled to the city on vacation.

Twenty-six-year-old Trevor Cadigan was flying with a friend from Dallas, 26-year-old Brian McDaniel. Cadigan moved to New York from Dallas not long before the crash and worked as an intern at Business Insider. McDaniel, who Cadigan knew from high school, was a firefighter in Dallas.

Twenty-nine-year-old Carla Vallejos Blanco had come to New York from Argentina on vacation with another friend who chose not to take part in the flight. Roxana Blanco said on an Argentine radio program that her niece liked taking pictures and hoped to do so from the helicopter. It's not clear if Blanco had any connection to the other individuals on the flight.

Twenty-nine-year-old Tristan Hill and 34-year-old Daniel Thompson are both believed to have worked for a New York tourism company called Sightsy that sells online tickets. Evan Edwards told the New York Daily News that he was Thompson's best friend and that he believes both Thompson and Hill were on the flight as a test-run so they could decide if it would be a good fit for Sightsy. Hill was engaged to be married on Memorial Day.

The final moments of a helicopter crash in New York City were captured by one of the victims on Instagram. #7News https://t.co/BDxBlTdQeB
— 7News Yahoo7 (@Y7News) March 13, 2018

Photography is a common pursuit of the passengers who book doors-off tours, and the fated group was no different. Cadigan posted a video to Instagram of his and McDaniel's smiling faces illuminated by the setting sun during takeoff. He also showed the helicopter lifting off its pad as it began its ascent. Eleven minutes after takeoff the aircraft crashed in the frigid river below.

Helicopter tours have become a daily feature of the Manhattan skies and Liberty Helicopters is one of the main companies. Just because these tours are popular, however, doesn't mean they're well-liked in the city. Residents have long complained about noise and safety issues.

The criticism was so wide-spread that in 2016, after almost 60,000 helicopter tours took off in 2015, Mayor Bill de Blasio announced that the city would allow only half as many flights. Between 1983 and 2011 there were 28 helicopter crashes in the city and at least 19 fatalities. The March 11, 2018, crash is America's deadliest involving a national doors-off helicopter tour.

Liberty Helicopter has itself been involved in three helicopter crashes since 2011, counting this most recent crash. The worst of those crashes occurred in 2009, when one of their helicopters collided with a small plane, killing all six onboard the helicopter and three on board the small plane.

U.S. Senator Chuck Schumer of New York has asked the FAA to temporarily suspend Liberty's operating certificate while its safety record and this latest crash are investigated.