January 17, 2018
A tragic Amtrak derailment in Washington state resulted in multiple fatalities, injured approximately a hundred people, and caused safety advocates to press for faster implementation of positive train control. Victims affected by the WA train crash have begun to file lawsuits regarding the derailment, with more claims likely to come forward in the coming months.

On December 18, 2017, Amtrak Train 501 derailed as it was making its first trip with paying passengers from Seattle, Washington, to Portland, Oregon. The derailment happened as the train was crossing an overpass over Interstate 5 in DuPont at around 7:43 a.m., and sent multiple cars hurtling to the highway below, damaging at least five passenger vehicles. 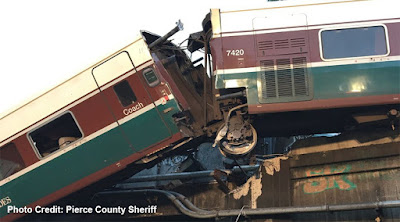 Three people died in the Washington Amtrak train derailment, with an estimated 100 others, including eight on the highway, taken to local hospitals.

Killed in the crash were:

According to the National Transportation Safety Board (NTSB), the train's locomotive, power car, and two passenger cars derailed onto the Interstate, coming into contact with 14 highway vehicles.

Cascades Amtrak Train Crashed on its First Route with Passengers

The route taken by Amtrak Train 501 had just been upgraded to allow for passenger trains, as it had previously been used by freight trains. Known as the Point Defiance Bypass route, the cost to upgrade the passage was around $181 million.

Shortly after the accident, the NTSB issued its preliminary report regarding the crash. Among the NTSB's findings:

Safety advocates have long pushed for trains to be equipped with positive train control, a safety system designed to automatically slow down a train moving too quickly.

"Positive Train Control (PTC), an advanced train control system mandated by Congress in the Rail Safety Improvement Act of 2008, is designed to prevent train-to-train collisions, overspeed derailments, incursions into established work zone limits, and the movement of a train through a switch left in the wrong position," the NTSB wrote. "If a train does not slow for an upcoming speed restriction, PTC will alert the engineer to slow the train. If an appropriate action is not taken, PTC will apply the train brakes before it violates the speed restriction. In this accident, PTC would have notified the engineer of train 501 about the speed reduction for the curve; if the engineer did not take appropriate action to control the train's speed, PTC would have applied the train brakes to maintain compliance with the speed restriction and to stop the train."

In an editorial, the editorial board of The New York Times called the Washington Amtrak train derailment the result of a "collective failure," highlighting similarities between this derailment and the 2015 Amtrak derailment in Philadelphia that killed eight people.

Regarding Positive Train Control, the editorial board wrote "This technology is not some hot new thing. The National Transportation Safety Board has been recommending it for nearly half a century. For various reasons—including bureaucratic inertia and penny-pinching—many railroads still don't have functioning systems in place."

Blaming both the industry and federal and state governments, the board noted that some railroads have made "far too little progress" in implementing Positive Train Control.

An Associated Press article notes that 298 people have died in train crashes that proper implementation of PTC would have prevented. An additional 6,763 people were injured, and almost $385 million in property damage was caused in those crashes.

"We have recommended PTC for decades," said Bella Dinh-Zarr, NTSB member. "Unfortunately the deadline was moved farther into the future, and every year that we wait to implement PTC to its fullest extent means that more people will be killed and injured." Train accident lawyer, Ronald L.M. Goldman, has been writing about this issue for years, and said: “With rhythmic regularity, passenger trains crash, lives are lost, and calls for PTC are renewed. Yet, little has been done to put teeth into legislation demanding installation of this life saving system. Enough is enough! Congress must act – and now – or more lives are sure to be sacrificed.”

The NTSB and other agencies are involved in investigating the Washington derailment. A full report is not likely for months at the earliest.
Amtrak Derailment train Washington