August 28, 2017
A helicopter crash near Hawaii is assumed to have killed five soldiers, with DNA evidence used to identify three of the soldiers. The five soldiers—two pilots and three air crew members—were part of a night time training mission off Kaena Point in Hawaii on August 15 when the UH-60 Black Hawk helicopter they were in crashed.

The downed helicopter was part of an army training mission with another Black Hawk when communications between the two helicopters were interrupted. The pilot of the lead helicopter turned his aircraft around to begin a search, but soon after called the Coast Guard, realizing he did not have the equipment to launch a proper rescue mission.

Shortly after the helicopters lost communications, the Coast Guard located a debris field that included fuselage and a helmet. 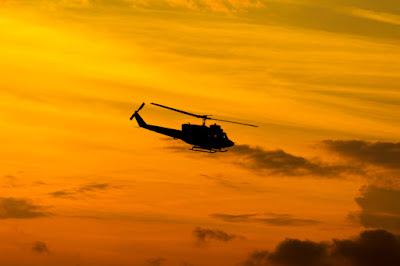 After searching 72,000 square nautical miles, the Coast Guard called off the search for survivors on August 21. The Army, Coast Guard, Navy and local organizations in Hawaii all took part in the search for the missing soldiers. Despite crews bringing in sonar and underwater vehicles to aid in the search, after only a week, the soldiers were not found.

"A decision to suspend searching without finding survivors is extremely difficult given the depth of its impact," said Rear Adm. Vincent B. Atkins, commander of Coast Guard 14th District.

"Our five soldiers who represent the best and the brightest of America have not been found," said Maj. Gen. Christopher Cavoli, commander of the 25th Infantry Division.

Although the search for survivors was suspended, the Navy, Coast Guard and 25th Infantry Division are involved in recovery and salvage efforts. An investigation into what caused the helicopter crash is in the early stages.

Rescue personnel caution Hawaiian residents that crash debris may still wash up on shore or be found floating. That debris is hazardous and should only be recovered by people who have the proper equipment and training, due to the risk of injury from sharp edges. Anyone who finds debris they believe is from the crash should call the 25th Combat Aviation Brigade Staff Duty Officer at 808-656-1080.

DNA evidence found in the crash debris was used to identify three of the victims found as of August 28. The three, who have now been declared dead, are:

Black Hawk helicopters were involved in two military crashes in August. In addition to the tragedy in Hawaii, a Black Hawk helicopter crashed off Yemen's coast on August 25. One U.S. service member was missing after the accident, while five other members who were on board the helicopter were rescued. Officials described the crash as a training accident.

"The Rivera Family is grateful for the love and concern of the Savannah community at this most devastating time. Emil's wife and children are being well cared for by their extended family, friends, and church, but they are counting on the prayers of many to get them through this."

The helicopter, which belongs to the elite 160th Special Operations Aviation Regiment, was involved in hoist training when it suddenly lost power and plummeted into the sea. Six people aboard the Black Hawk were ejected. Ships in the area were able to rescue five of the six ejected service members. Additional military units have been sent to the area to aid in the rescue.

"Commanders deemed this location appropriate and safe for a routine training event, considering both the operational environment and weather conditions at the time," CENTCOM told the AP.

The Army uses its 2,300 UH-60 Black Hawk helicopters for a variety of purposes, including transporting troops and close air support during combat missions.

The accident in Hawaii is also not the first crash involving military aircraft in the area.