May 18, 2017
Seven hours before the statue of limitations was set to expire in the Philadelphia train crash case against Brandon Bostian, the engineer who was operating Amtrak 188 when it crashed, the Pennsylvania Attorney General brought criminal charges against him. Six days later, Bostian turned himself in to authorities to face those charges.

It's the latest turn in the saga of the horrific Amtrak train crash that killed eight people and injured 200, an engineer who can't remember why it happened, and officials who believe that tragedy was entirely preventable. 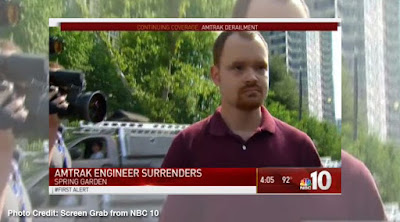 With the two-year anniversary of the crash of Amtrak 188 only hours away, it was beginning to look like Bostian would not be charged in the case, especially after, early this week, Philadelphia District Attorney Seth Williams stated that there was no evidence against Bostian showing criminal intent in the accident. Families of some of those who died in the crash, however, were determined not to see Bostian avoid legal consequences.

The family of Rachel Jacobs—a CEO and mother to a young child before being killed in the crash—filed a private criminal complaint in Philadelphia Municipal court, where attorneys representing several of the victim's families pressed Philadelphia Municipal Court President Judge Marsha Neifield to order the district attorney to bring charges against Bostian for his actions on the day of the Amtrak 188 crash. Because District Attorney Williams had already decided he would not charge Bostian, the DA sent the case to Pennsylvania Attorney General Josh Shapiro instead.

Read AG Shapiro’s statement on the filing of a criminal complaint for the deadly Amtrak 188 Train crash below. pic.twitter.com/hh42I7wt6U
— AG Josh Shapiro (@PAAttorneyGen) May 12, 2017

On Friday, May 12, 2017, hours from the two-year anniversary of the Philadelphia train crash, Shapiro charged Bostian with eight counts of involuntary manslaughter, one count of causing or risking a catastrophe, and many counts of reckless endangerment.

In a statement, Shapiro thanked his staff for helping make the charges on such a tight timeline.

"I commend our outstanding team in the Office of the Attorney General who worked diligently and thoughtfully around the clock to enable us to be in this position to pursue justice on behalf of the victims of this deadly crash," Shapiro said.

Six days later, on Thursday, May 18, 2017 at about 10:00 a.m., Bostian—silent and expressionless—turned himself in to police at Central Detectives in Philadelphia. As Bostian was handcuffed, his attorney said he had "no comment at this point." It’s not surprising for Bostian, who in the two years since the Philadelphia train crash has not spoken publicly of the events.


Before that fateful day in May of 2015, however, Bostian had spent his life loving trains and passionately pursuing a career in the railroad industry. During his senior year of college he worked part-time as a brakeman, and, after that, he landed a conductor job with Amtrak. He moved to California for a time to work for Caltrain, but in 2012, he returned to work for Amtrak again, this time on Amtrak's busiest line, the Northeast Corridor. It was the culmination of hard work and dedication to his career.

Those who worked with Bostian praised his work ethic. One colleague said Bostian's job in the Northeast Corridor was his end goal. "My impression was that he had become who he always set out to be—in charge of the head end of a train on a major railroad. And having come that far, he wasn't going to be distracted by anything."

It was distraction, however, that would prove to be Bostian's downfall.

NTSB Report Cites Engineer as Cause of 2015 Train Crash

After a year of investigation, the National Transportation Safety Board (NTSB) determined that the Philadelphia train crash was "the result of a loss of situation awareness by the train's engineer after his attention was diverted to an emergency involving another train."

Bostian, who the Amtrak 188 train crash investigation found had no drugs or alcohol in his system and had turned his cellphone off well before the crash, had engaged in a six-minute radio conversation regarding a SEPTA Regional Rail commuter train that was hit by rocks that had been thrown. Officials say that Bostian, who they describe as being "very cooperative" in the investigation, said he was concerned for the engineer of the commuter train. The radio communication on the matter ended only a minute before Amtrak 188 crashed.

Investigators believe that while he was caught up in the conversation, Bostian lost track of where he was in his route, and so he accelerated to a speed of 106 mph (believing he was in a 110 mph speed limit zone), when he had actually entered a 50 mph speed limit zone and was rapidly approaching a curve. The speed with which the train took the curve caused it to derail and led to eight fatalities and around 200 injuries.

Suffering a concussion in the train crash, Bostian has never regained full memory of the accident and the timeline or circumstances of events.

While Bostian was ultimately to blame for the crash, the NTSB and the Federal Railroad Administration (FRA) have said the Philadelphia train crash highlights a greater problem than operator errors, namely the lack of train safety technology.

Since 1970, the NTSB has pushed for positive train control (PTC), which enables a computer to remotely control a train using GPS with radar and track sensors, and allows for technological intervention when train operators are not in control.

In the May 15, 2016, press release on the crash of Amtrak 188 and its cause, NTSB Chairman Christopher A. Hart stressed how much of a difference positive train control could have made.

"It's widely understood that every person, no matter how conscientious and skilled, is fallible, which is why technology was developed to backstop human vulnerabilities," Hart said. "Had positive train control been in place on that stretch of track, this entirely preventable tragedy would not have happened."

In the aftermath of the crash, Amtrak has installed PTC throughout many sections of the Northeast Corridor, including the area where Amtrak 188 crashed.

After a train crash in Chatsworth, California in 2008 that killed 25 people, Congress passed legislation requiring PTC. Railroads were given until December of 2015 to comply, but, in response to pressure from the railroads, the deadline was adjusted to 2018. In theory, the Philadelphia train crash could have been avoided if the PTC had been installed on the original timeline.
Speaking with the New York Times in May of 2016, Sarah Feinberg, the head of the FRA, expressed concern over the new deadline.

"While Congress has given railroads at least three more years to fully implement P.T.C., the public deserves it sooner," Feinberg stated.