Passengers of the ill-fated balloon ride assembled at a WalMart parking lot at 5:45 a.m. on Saturday morning to catch a van to the launch site for Heart of Texas Hot Air Balloon Rides. The hot air balloon was scheduled to depart with the sunrise at 6:49 a.m. for an hour-long ride. Authorities say the balloon was delayed for unknown reasons and ended up departing at around 7:10 a.m.

Once airborne, the hot air balloon travelled for about eight miles before something went wrong. Officials believe the balloon clipped power lines adjacent to a field at around 7:42 a.m. A 911 call was placed around a minute later. The balloon’s passenger basket (known as a gondola) came to rest just under a mile away from the balloon (known as an envelope). 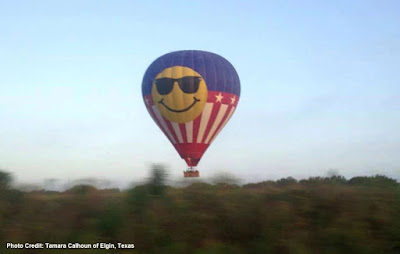 National Transportation Safety Board (NTSB) member Robert Sumwalt told reporters that a fire had broken out on the hot air balloon before it fell to the ground. At this time, it is unclear whether the fire happened before the hot air balloon hit the power lines or after.
Local resident Margaret Wylie told USA TODAY she was taking her dog out at around 7:40 a.m. when she heard a loud “pop, pop, pop.” When she looked around she saw a “fireball going up,” noting that the top of the flames nearly reached the power lines.

Officials with the NTSB are in the early stages of what will likely be a lengthy investigation into the cause of the Texas hot air balloon accident. As of now, the NTSB’s “working hypothesis” is that the hot air balloon made contact with the power lines, which likely severed the envelope from the gondola. This sent the gondola and the 16 people inside plummeting to the ground.

While most of the victims have not been formally identified, families and friends of loved ones who died in the hot air balloon crash have begun to memorialize the victims on the internet. Below are some of victims that have been identified by media reports:

·      Joe Owens and Tresa Shafer Owens – The couple from Katy, Texas, “adored their children and grandchildren,” according to a GoFundMe page that has been set up in their honor to cover funeral expenses. The page says Tresa was a preschool teacher at TigerLane Preschool.

·      Paige Brabson and Lorilee Brabson - Paige and her mother, Lorilee were San Antonio residents. The trip on the hot air balloon was a gift that Paige had given her mother on Mother’s Day. Paige leaves behind a newborn child.

·      Sunday and Matt Rowan – The College Station couple had recently married in February. Matt was a professor and burn treatment researcher. Sunday was mother to a five-year-old boy.

·      Brian and Tressie Neill – The San Antonio couple were married for 23 years. According to a GoFundMe page, Brian surprised his wife with the hot air balloon trip. While the two of them were in the air, Brian sent his brother a photo of the view from the air, asking, “can you see our reflection in the clouds?”

According to the NTSB, the Texas hot air balloon accident investigation will focus on the operation of the balloon, the training and in-flight actions of pilot Alfred “Skip” Nichols, and the operator, Heart of Texas Hot Air Balloon Rides.

Another point of emphasis for investigators will be the ground crew for Heart of Texas Hot Air Balloon Rides, which will be interviewed by the NTSB on Monday. Among the many questions that will need to be answered is why the hot air balloon was delayed for 20 minutes before departure.

According to Sumwalt, the weather at the time of departure in San Marcos (six miles away from crash site) was overcast with visibility of two miles. Sumwalt has said it is too early to speculate if weather played a role in the Texas hot air balloon accident.

The Federal Bureau of Investigation (FBI) found 14 electronic devices that belonged to a number of the victims at the scene of the Texas hot air balloon crash, including cell phones, an iPad and three cameras. According to CNN, Nichols used and iPad and a cell phone to communicate with the ground crew during each trip. Investigators are hoping that images or videos taken from these devices will help to uncover what went wrong in the moments prior to the deadly hot air balloon crash.

According to Dean Carlton, president of the Balloon Federation of America, as many as half a million people in the U.S. ride in hot air balloons every year. An estimated 200 large hot air balloon tour operators provide services throughout the country, along with hundreds of other smaller businesses.

In her 2014 letter to the FAA, the NTSB’s former chair Deborah Hersman pointed out that balloon gondolas can carry upwards of 20 people, opening the door to a high number of deaths if a safety deficiency leads to an accident. Hersman recommended that balloon operators be required to have letters of authorization in order to provide tour flights, making them no different than tour helicopter pilots, for example.

The FAA responded to the NTSB’s recommendation, saying the proposed letters of authorization “would not result in significantly higher levels of operational safety.”

“The investigation and prosecution of this disaster must include a review of the oversight and licensing of hot air balloon companies,” says personal injury attorney Ilyas Akbari of Baum, Hedlund, Aristei & Goldman. “How many more deaths will it take before the FAA finally acts on the NTSB’s warnings? These operations routinely charge more per person than many airline tickets, with virtually zero oversight. Our hearts go out to the families of those lost in this horrific tragedy.”