Prior to the MH17 disaster that killed 298 people on July 17, Ukraine had imposed a partial flight ban for the region. On July 1, flight plans below 26,000 feet were denied. Flights below 32,000 feet were banned after pro-Russian separatists shot down a Ukrainian military transport plane on July 14. The Antonov AN-26 transport plane was flying at 21,000 feet before it was brought down. Malaysia Airlines Flight 17 was flying at 33,000 feet before it crashed near Grabovo, Ukraine. 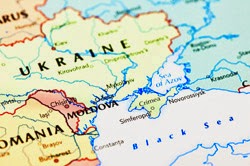 After the MH17 disaster, the Federal Aviation Administration (FAA) issued a Notice to Airmen (NOTAM) banning all U.S. flight operations in eastern Ukraine for an indefinite time. The FAA cited that “events have indicated the potential for continued hazardous activities.” They will reevaluate the status of the ban on October 3, 2014.

According to the Wall Street Journal, Ukrainian skies act as a main artery for global air travel. Over 400 flights would use their air space in a day. Flight paths that cross the Ukraine connect Northern Europe to the Middle East and Western Europe to Asia.

Some flight paths over Ukraine suspended

In other countries, the decision on whether or not to use the same flight path as MH17 may depend on the airline. In the U.S., the decision ultimately comes from the FAA, its air safety regulator. According to New.com.au, airlines in Australia are unrestricted but their Civil Aviation Safety Authority (CASA) does put out notices on high-risk areas. Qantas Airways started rerouting flights away from Ukraine in March after Russian troops entered the Crimea.

Other airlines that stopped service after the MH17 crashed include:

·         Transaero, a Russian airline, will avoid flight paths over Ukraine on all future flights.

·         Delta Airlines released a statement saying they will not route flights through Ukrainian airspace.

·     Korean Airlines Co., has also been avoiding flight paths over Eastern Ukraine since March and is reviewing their risk control assessments on other flights.

·         Emirates Airline said it would suspend operations over Kiev and even returned a flight from Dubai.

·         British Airways released a statement saying that their flights only use Ukrainian airspace once a day on a route from Heathrow and Kiev.

·         Air France, Turkish Airlines and Air India all said they would reroute flights away from Ukraine.

Will my plane fly over Ukraine?


Airlines don’t normally post details of flight paths to the public. To find out about a current flight path, including carriers that are flying over Ukrainian airspace, you can track a particular flight through websites like Flightradar24.com. This provides a real time view of planes various routes throughout the world.
Airplane Crash Malaysia Airlines Mass disaster MH17