Two Chinese students were killed and hundreds of other passengers sustained injuries on Saturday morning when a Boeing 777, operated by Asiana Airlines, crashed during landing at San Francisco International Airport (SFO). The fatal crash occurred at 11:27 a.m. on SFO's runway 28. Video footage of the crash has been broadcast on YouTube and many other media outlets, where the plane's tail section looks to have hit a seawall at the beginning of the runway. The tail section broke away from the plane and the aircraft skidded and spun on its belly until it came to a stop. It then caught fire as passengers piled out of the exits.

A statement issued by Asiana Airlines indicated that there were 291 passengers aboard Asiana Flight 214, which departed from Incheon International Airport in Seoul, South Korea. Asiana said 141 passengers were Chinese, 77 Koreans, 64 Americans, three Canadians, one French, one Vietnamese and one Japanese.

The two deceased victims, 16-year-olds Ye Mengyuan and Wang Linjia, were Chinese students participating in a summer exchange program. They were traveling with 28 other students and four teachers. In total, 182 people sustained injuries and were taken to area hospitals, with 19 still hospitalized. Eight of those are currently listed in critical condition. The injuries reported by San Francisco General Hospital range from paralysis to road rash, which indicates that some people may have been dragged as the plane skidded down the runway.

The National Transportation Safety Board (NTSB) will be leading the investigation into what caused Saturday's crash. So far, their investigation has revealed that the pilot flying the plane during the botched landing was flying too slow – the target speed for the landing was 137 knots (159 miles per hour).  Flight records have revealed that the plane was traveling significantly slower than the target speed.

Additionally, the cockpit voice recorder captured the pilots asking the control tower for permission to do a "go-around" roughly 1.5 seconds before impact with the ground. This means the flight crew wanted to abort the landing and go around for another try.

Finally, the pilot received a warning known as a "stick shaker" roughly four seconds before the plane touched down, indicating the aircraft was on the verge of an aerodynamic stall. This simply means the plane was losing its ability to stay airborne, due to the lack of thrust carried by the aircraft. 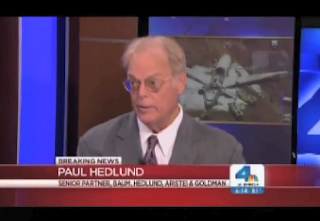 Paul Hedlund told KNBC 4 Los Angeles, “Well he tried to abort too late. They tried to increase their throttle too late. The stick shaker came on indicating that the air speed is decreasing even further after they tried to increase their throttle. The problem is all of these audibles that are being called out by the crew are too late, way too late. At 500 feet they should be set completely for this landing, at 1,000 feet is really there’s supposed to be stabilized and right on the glide slope and these people are way way down, their speed is way too low and they can’t change it quickly enough.”

Though the investigation is still in its early stages, NTSB officials are focusing their attention on the actions of the flight crew, as any obvious mechanical issue with the Boeing 777 has not yet been found. The NTSB is interviewing all four pilots on Asiana Flight 214, with specific attention to be paid to Lee Kang-guk, the 46-year-old pilot at the controls for the landing. Mr. Lee was making his first landing attempt in San Francisco while flying a Boeing 777.
Airline Crash Airplane Crash Asiana Airlines Flight 214 NTSB Paul Hedlund SFO