80 Dead, Including at Least One American in Europe's Deadliest Train Crash in Over Two Decades 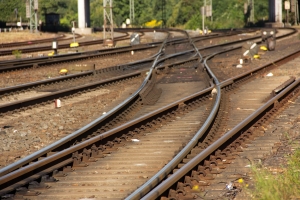 The U.S. State Department issued a statement in the aftermath of the tragedy, indicating that one American had been killed in the crash, and five others had been injured, though "these numbers may change as we receive additional information."
The fatal crash occurred at 8:41 p.m. local time in the city of Santiago de Compostela. The train was on its way to the city of Ferrol from Madrid when it crashed roughly two miles outside of Santiago de Compostela station. Dramatic video footage of the crash shows the train speeding as it left the tracks on a curve and violently overturned. Officials have said excessive speed is the likely cause of the crash.
A Spanish newspaper quoted the train driver as traveling at a speed of 118 miles per hour on the curve. The speed limit for that section of track is 49 miles per hour. The train driver, who was hospitalized in the crash, has been placed under formal investigation and a judge has ordered law enforcement officials to take a statement.
As of Thursday morning, 95 people remain in the hospital, including 36 people that are listed in critical condition. Four of those critical are children. Tomas Lopez was traveling with his wife and two children on the train. "My daughter is okay but I don't know where my wife and son are…I have been looking for them all night from one place to another," he told Reuters. So many local residents have turned out to donate blood that a second donation site had to be set up to accommodate them.
After visiting the site of the crash, Mariano Rajoy, Spain's Prime Minister, declared three days of national mourning. "The scene is shocking," he said in a radio interview. President Obama expressed his condolences to the people of Spain, saying in a statement, "today the American people grieve with our Spanish friends."