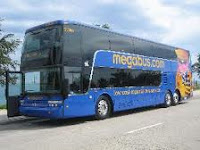 A double-decker Megabus crashed into a bridge support pillar near Litchfield, Illinois on Thursday, August 2, killing a 24-year-old native of India and injuring at least 38 people. The bus, which was at full capacity with 81 passengers, was traveling on Interstate 55 between Chicago and Kansas City when it slammed into the bridge support beam.

Killed in the crash was 24-year-old Aditi R. Avhad, an India native that was on her way to Columbia, Missouri. It is unclear why she was heading to that destination, and authorities are still uncertain where she was seated on the bus at the time of the crash.

First responders found the front end of the bus completely crumpled and smashed into the support pillar. Some passengers on the top deck of the bus were trapped inside and emergency crews were forced to use a latter in order to reach them. Others that were able to exit themselves assisted their fellow passengers, tending to the injured on the side of Interstate 55.

Authorities estimate that at least 38 people were taken to area hospitals. Five of those injured had to be airlifted to hospitals in St. Louis, Missouri and Springfield, Illinois. Their conditions are unknown at this time. "There was a lot of screaming and crying," said passenger Baysha Collins, who was thrown from her seat on the top deck of the bus all the way down the stairway leading to the bus's bottom level. "There was blood everywhere. I was just in shock."

In a statement issued after Thursday's crash, the National Transportation Safety Board (NTSB) said they will "determine if there are safety implications that merit agency action," but will not be investigating the crash.

The double-decker bus was operated by Megabus, a low cost bus company that has services over 19 million customers in the U.S. and Canada. According to USA Today, the company is no stranger to crashes. In 2010, four passengers aboard another double-decker Megabus were killed when the driver slammed into a low bridge near Syracuse, New York. The driver received homicide charges but was later acquitted in a subsequent trial. Records show that Megabus was involved in three crashes in 2011. One person died in each of those crashes.

This incident is one in a recent string of accidents involving low-fare busses. Safety advocates have suggested that low-fare bus companies should be subjected to stricter regulations to prevent these crashes from happening.
Bus Accident Bus Crash bus crash attorney