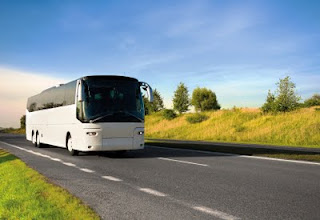 In a statement issued on Thursday, U.S. Transportation Secretary Ray LaHood announced a series of new measures designed to improve bus safety. One such measure will require commercial bus drivers to go through more rigorous driver's license testing.
The U.S. Department of Transportation's Federal Motor Carrier Safety Administration (FMCSA) will now be requiring drivers who apply for a commercial driver's license to first obtain a commercial driver's learning permit. Up to this point, commercial bus drivers were not required to have a learner's permit before applying for a license.
The U.S. Department of Transportation (DOT) also wants to strengthen bus carrier and driver compliance with federal safety regulations. The DOT will now wield greater authority to pursue enforcement actions against companies that are deemed unsafe "reincarnated" passenger carriers. Reincarnated carriers are bus companies that were given bad safety ratings in the past. These companies then “repackage” themselves as a new company with a clean safety rating.
The Department also proposed an initiative requiring new bus companies to undergo a full safety audit before they are eligible to receive operating authority from the DOT. Companies that are caught operating without the authority of the DOT will be susceptible to a $25,000 fine.
Transportation Secretary LaHood said this spring and summer, the FMCSA will be working together with state law enforcement across the country to conduct motorcoach inspections to ensure that bus carriers are in compliance with federal safety regulations. LaHood is also encouraging bus passengers to research the safety records of bus companies before booking travel.
Report bus safety violations http://nccdb.fmcsa.dot.gov/HomePage.asp
Research bus safety records http://www.fmcsa.dot.gov/safety-security/PCS/Consumers.aspx
Bus Accident Bus Crash Bus Safety