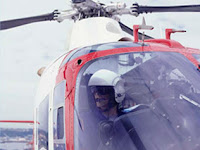 Helicopters provide quick access to remote accident sites, and they can make the difference between life and death for serious injury victims. At the same time, medical evacuation via chopper presents its own set of risks. Over a 17-year period beginning in 1992, air ambulance helicopter crashes caused over 126 deaths, a troubling statistic that peaked in 2008 when 24 people perished in six separate fatal air accidents.

One of those six accidents involved a Maryland teen, Ashley Younger, who lost her life two weeks before her 18th birthday when she was being flown to a trauma center after sustaining injuries in a car accident. The initial crash site was not far from Ashley's home and her mother and grandmother reached the scene before she was evacuated. The two women reassured Ashley and told her that all would be okay before watching the Maryland State Police helicopter take off into the night sky.
But the Aerospatiale (Eurocopter) chopper would not reach the hospital. The helicopter crashed in a wooded rural area near Andrews Air Force Base, killing Ashley, an EMT, a state trooper and the pilot. Ashley's close friend, who was also injured in the car crash, survived the helicopter crash but with serious injuries. She was the only survivor.
A subsequent National Transportation Safety Board (NTSB) investigation identified pilot error as the probable cause of the September 27, 2008 medevac crash. The agency also noted several contributing factors, including the pilot's lack of recent instrument flight experience, the failure of air traffic control to provide current weather observations to the pilot, and the pilot's increased workload due to inadequate air traffic control handling at nearby airports.
FAA Issues Notice of Proposed Rulemaking
The Federal Aviation Administration (FAA) has responded to high rates of helicopter crashes by proposing new rules intended to increase safety for pilots, first responders and the patients they set out to help. As proposed, the rules would require air ambulance operators to:
One important aspect of the proposed rules is a requirement that emergency helicopter operators equip helicopters with "Helicopter Terrain Awareness and Warning Systems" (HTAWS) to detect terrain and other obstacles. Operators are expected to oppose this proposed rule due to expense. Some also assert that the new rules will actually encourage pilots to take greater risks than before. But these enhancements seems like an obvious need for pilots who regularly operate in inherently stressful medevac situations under adverse conditions such as darkness, wind, fog, and rain.
As Bureaucratic Solutions Proceed, Civil Action Is Often Necessary
The new federal rules are open to a 90-day public comment period ending on January 10, 2011, and final rules will likely not be in place before mid-2011 at the earliest. Regardless of the ultimate effect any new rules will have on medevac safety, accidents resulting from such causes as pilot error and defective or poorly maintained equipment cannot always be prevented.
Legal professionals work with industry experts to promote safer skies by crafting laws that target the worst problems in air transportation. Attorneys also serve the public by helping families assess the aftermath of a tragic loss and hold negligent companies responsible for the harm they cause. Experience with complex helicopter accident evidence and the dedication to handle legal claims that can take years to conclude are the hallmarks of a successful aviation accident law firm.
Air Ambulance Helicopter Crash Medevac