March 24, 2011
An investigation has been launched after the control tower at Reagan Washington National Airport failed to respond to pilot requests on Wednesday. The incident forced two airliners carrying a total of 165 people to land without clearance.
Reports have now surfaced that the air traffic controller fell asleep on the job, causing American Airlines Flight 1012 and United Airlines Flight 628T to land on their own. According to internal records, the airport tower was unresponsive to pilot request and unresponsive to other regional controllers who called and also attempted to gain communication by using a “shout line,” which sends messages via a loudspeaker in the tower.
Pilots were able to communicate with a Virginia-based air traffic control facility, authorities said, before using “uncontrolled airport” procedures to land safely. Certain aviation experts have said that no lives were put at risk due to secondary safety measures, including radio frequency and the potential aid of the regional control facility. They also said that the safety of the planes were never really at risk, arguing that smaller planes often land at small airports without control towers, and without tragedy. 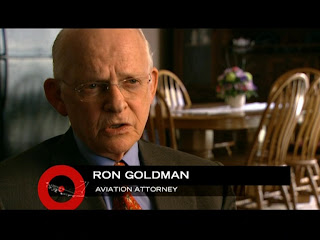 Other safety experts disagree, and attest that this incident raises major concern about air traffic controller fatigue, a very serious and continuing safety issue in the aviation industry.
“There is no justification for this type of safety lapse,” argued Ron Goldman, aviation attorney for Baum, Hedlund, Aristei & Goldman, a national aviation disaster law firm.
“This was an extraordinarily dangerous situation,” Goldman continued. “Flight by general aviation airplanes into uncontrolled airports is vastly different than commercial airliners carrying passengers into a major hub airport. To say no airplane or passenger suffered a compromise of safety is untrue. Obviously, a thorough investigation is necessary, and steps need to be undertaken to be sure it could never happen again at any controlled airport.”
The Federal Aviation Administration (FAA) and the National Transportation Safety Board (NTSB) are investigating the incident.
Aviation safety FAA Reagan National incident