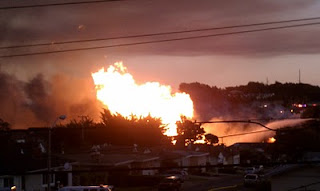 A high-pressure Pacific Gas and Electric Co. gas line ruptured on Thursday, September 9, 2010, sending a wall of fire into a quiet California neighborhood just 14 miles from San Francisco. The Crestmoor neighborhood in San Bruno, California, was rocked by the thunderous explosion at around 6:15 p.m, which engulfed the suburban neighborhood in flames, killing at least four people and destroying 37 homes. Over 50 people were injured, some critically. Three people remain listed as missing.
Investigators with the California Public Utilities Commission and the National Transportation Safety Board arrived on Friday to find a 30-foot crater surrounded by a neighborhood that had mostly been turned into ashes. No one knows why the 30-inch diameter pipe—the main transmission line for gas in the neighborhood—burst with what seems to have been no warning.
The probe has been focused on possible corrosive liquids within the pipeline as well as a rumor that residents smelled gas before the fatal blast. PG&E remains at the forefront of the investigation. Although the personal toll of the explosion is clearly overwhelming, it is yet unclear just how large the financial toll will be.  News on this mass disaster
Gas pipeline explosion Mass disaster PG+E San Bruno