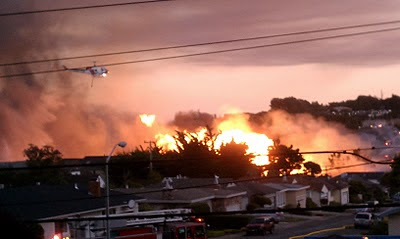 The investigation into the cause of the ruptured gas pipe that killed seven people and left a San Bruno neighborhood in ashes has begun and officials are looking at every angle.
The California Public Utilities Commission is spearheading the investigation alongside the National Transportation Safety Board. Investigators have turned their attention to the possibility of internal corrosion on the 30-inch-diameter pipeline as one potential cause for the blast.
A PG&E document shows that PG&E knew and was concerned about corrosive liquids found in four Bay Area natural gas pipelines, including the one that burst in San Bruno. Federal investigators are also looking into the inferior shut-off valves, which took workers almost two hours to manually close after the explosion. Some state officials have said that those valves should have been automatically or remotely controlled.
There have also been reports, or rumors, of residents smelling gas before the explosion. Investigators have been looking into these reports, which if true, would suggest that a small leak was present before the explosion. If the reports are false and there was no gas smell before the blast, that could indicate a sudden catastrophic failure in the pipeline.
Gas pipeline explosion PG+E San Bruno