How to rebuild in the wake of Haiti’s quake 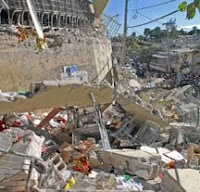 The mass disaster caused by the 7.0 earthquake in Haiti on January 12, 2010, was the most powerful earthquake to hit Haiti in almost 200 years. The destruction has left the nation’s densely populated capital, Port-au-Prince, in complete ruins. The most recent official reports place the death toll at 150,000, although that number is expected to be much higher since victims remain buried underneath tons of mangled rubble and families have buried loved ones on their own.
In the days that followed the catastrophic quake, horrific images of death and devastation flooded the media prompting a massive international call for aid. Days after the devastating disaster, survivor rescue missions have become body recovery operations. In the months and years to follow, immediate humanitarian aid will then lead to the next phase for the Haitian people and the international community; the massive job of rebuilding the shattered country.
This devastating natural disaster has also brought attention to the importance of earthquake awareness and earthquake preparedness, especially in areas near fault lines. Any picture of the Haitian quake’s aftermath will display a street filled with rubble or a building flattened into a mountain of cement. Experts believe that many buildings, particularly in the city of Port-au-Prince, collapsed during the quake because they were never fit for this type of disaster. Professor Mostafa Elengebawy, Ph.D., earthquake expert and professional engineer, recently wrote:
"Building performance in Haiti earthquake was very poor including unreinforced masonry and nonductile reinforced concrete buildings. . . Many buildings collapsed just like pancakes as builders put the reinforced concrete roof on top of low-grade bricks, construction blocks, or thin columns. Other nonductile reinforced concrete buildings collapsed because builders or owners were trying to cut costs by skimping on cement, adding excessive water, and reducing the amount of reinforcing steel.”
Although California’s structures would seem much more ready to withstand an earthquake of this magnitude, some buildings built decades ago have not been retrofitted to today’s seismic standards. Professor Elengebawy, also warns that buildings retrofitted before the 1980's are at risk of suffering damage due to temblors. As Haiti prepares to rebuild, many remain hopeful. Bill Clinton, the UN envoy to Haiti, has said that Haitians are “going to be given the opportunity to re-imagine their country, through the rebuilding of Port-au-Prince. . .” Hopefully the rest of the world, particularly those areas on or near fault lines, will also see an opportunity in this tragedy to begin or continue preparing themselves.
Structure Collapse