Five passengers died when their small plane crashed into a parking lot in Santa Ana, California. Miraculously, no one on the ground was killed or injured, a feat that witnesses say may have been due to the pilot's actions. This tragedy is a reminder of the devastation that can result from plane crashes, even those involving small planes.

On August 5, 2018, five people boarded a twin-engine Cessna 414 on their way to John Wayne Airport, in Santa Ana, California. The group was reportedly on its way from Buchanan Field Airport in Concord, California, to attend a motivational conference in Los Angeles when it crashed less than two miles from John Wayne Airport. 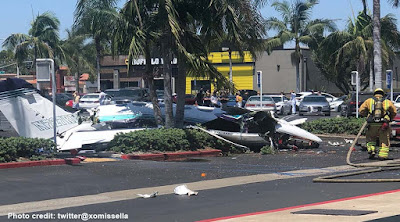 The victims were identified as

Witness to OC plane crash said he was coming out of a sushi restaurant near the CVS in Santa Ana when he saw the plane flying low overhead, then turn sharply to left and start to dive.

He saw the plane crash into the red car and send it flying into the air with shrapnel. pic.twitter.com/Chtfx5IB7i
— Josh Cain (@joshpcain) August 5, 2018


The pilot, Scott Shepherd, reportedly declared an emergency just before the crash, though officials have not said what led Shepherd to declare an emergency, nor what may have been wrong with the aircraft. The plane crashed into a Staples parking lot near the South Coast Plaza in the 3800 block of Bristol Street at around 12:30 p.m. It collided with several parked cars and left a 1-foot hole in the asphalt. Responders credited the pilot for preventing more injuries on the ground.

"Nobody on the ground was injured, so I don't know anything about what this pilot did or what he was thinking, but it could have been much more tragic," said Capt. Tony Bommarito, a spokesperson for the Orange County Fire Authority. "This is a Sunday afternoon, and we have people shopping, so the fact that there are no injuries on the ground is a miracle in itself."

Shepherd, president and CEO of Category III Development, had a private pilot license since August 2003 and obtained a new rating in 2017, which allowed him to fly multi-engine aircraft that take off and land on the ground, as opposed to on water. His company bought the plane, which was capable of carrying up to seven people, in 2016.


According to witnesses, the plane's engine cut out, making a sputtering sound before it hit the ground. Other witnesses reported feeling the ground and building shake.

"My godson and I heard the noise, and then I looked up, and it was already lowering down," said Connie Hernandez. "It, like, lost control, and it was twirling, and the more twirl, the more lower it came down and then we heard the bang."

Those nearby—including a former paramedic—rushed to help but quickly found there wasn't anything they could do, as all five on board died instantly.

Despite the crash, witnesses say there was no explosion and no fire, leading some to speculate that the plane ran out of fuel, although investigators have not yet determined the cause. Cessna aircraft like this use 100 octane fuel, which is highly combustible making the lack of a fire or explosion that much more surprising.

If there was no fuel in the tank, investigators will investigate what happened that would result in a lack of fuel, including human error and mechanical issues such as a leak.

Victims of Small Plane Crash Remembered by Loved Ones

The Shepherds leave behind a 7-year-old son and a 5-year-old daughter. The two are remembered as being involved in volunteer activities at their children's school. Navid Hakimi had a 2-year-old son and was well-known as a DJ and producer. Nasim Ghanadan volunteered at Room to Read, while Floria Hakimi helped found the Persian Center in Berkeley.

A statement from Pacific Union noted that the organization was mourning the loss of the colleagues and friends, and reminded readers that life is precious.

The Federal Aviation Administration (FAA) and National Transportation Safety Board (NTSB) are investigating the crash. The NTSB usually releases a preliminary report within a week or two of a crash, with a full report released around a year after, depending on how long the investigation takes