The Complications of Football Helmet Research

September 23, 2013
Researchers are working tirelessly to develop new technology for football helmets, specifically aimed at reducing one's susceptibility to concussions. As Inside Science pointed out in an article last week, the research and development of this technology is complicated to say the least, because contrary to what helmet manufacturers might claim, there is currently no evidence that a specific brand of helmet can lower the risk of sustaining a concussion. A recent study among 40,000 high school football players in Wisconsin found that "lower risks of sustaining a sports-related concussion and its severity were not improved based on a specific manufacturer." Of course, this should not stop researchers from trying to develop technology that can reduce force from helmet-to-helmet collisions, because even the smallest amount can make a difference. 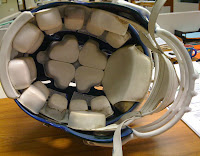 Some of the latest ideas that are being tested include a thin polymer sheet designed to reinforce padding inside a football helmet, in theory reducing the force a player would feel in a collision. Biomechanical engineers at UCLA claim this technology could reduce force by "up to 25 percent." Kevlar, the material used in bulletproof vests, has also been suggested as a way to reinforce the padding in football helmets.


"We know that you cannot eliminate all concussions, but the technology to minimize concussions has been available for decades," says Ilyas Akbari, a bioengineer and attorney at Baum, Hedlund, Aristei & Goldman. Mr. Akbari is currently representing Edward Acuna, a former high school football player that suffered a subdural hematoma during a game. Acuna was wearing a helmet manufactured by Riddell Sports, Inc. "One thing is clear: the more reduction of force to the brain, the better. Even a 10 percent reduction in force makes a huge difference when we are talking
about brain injuries."