September 28, 2012
Metrolink, Southern California's commuter train system, is working to install a warning system called Positive Train Control on some of their locomotives and cab cars, along with hundreds of miles of train track.

Positive Train Control, or PTC, is a GPS system that can monitor and control train movements to increase safety. The technology is designed to stop train crashes and derailments brought on by human error. "PTC monitors and, if necessary, controls train movement in the event of human error," said Metrolink in a statement. "PTC may also bring trains to a safe stop in the event of a natural disaster."

In 2008, a Metrolink train crash in Chatsworth killed 25 people and injured 135 others. An investigation into the crash revealed that the conductor of the Metrolink train was using his cell phone to send and receive text messages while on duty and ran through a red signal, putting the commuter train on a collision course with a freight train. 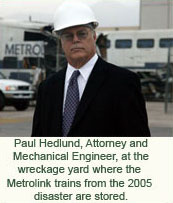 Attorney Paul Hedlund, who represented several passengers killed and injured in the Metrolink Chatsworth crash, said that if postive train control systems were already in place, the Chatsworth tragedy would not have happened.
Safety experts lamented that if the train was equipped with PTC, the fatal 2008 train crash would not have happened. Congress adopted the Rail Safety Improvement Act shortly after the Chatsworth crash, mandating that train systems nationwide be equipped with PTC. Metrolink said it expects to have the system completely installed by the end 2013 at a total cost of over $200 million.
Metrolink Chatsworth crash Paul Hedlund positive train control train accident